Jonah is a short by Kibwe Tavares. It is set in Zanzibar and looks at the effects tourism can have on a country from an economic and environmental perspective. By utilising a narrative of  friendship between Mbwana and his best friend Juma, these themes are explored. Mbwana and Juma are men with big dreams. Dreams that become a reality when they photograph “the world’s biggest jumping fish” leaping out of the sea.

Their tiny town soon blossoms into a tourist hot-spot as a result. But for Mbwana, the reality isn’t what he dreamed – when he meets the fish again, both of them forgotten, ruined and old, he decides only one of them can survive.

The trailer teases some of the detailed and rich CGI imagery. You can see the intricacies afforded by Factory Fifteen‘s superb 3D animation efforts below. Tavares describes  the project as a collage of

Live action and animation….the CGI is photo real but how we use it becomes increasing magical as we progress through the film. As an old man, Jonah is ashamed of what his old fishing town has become and decides to hunt down the legendary fish and kill it, killing what it represents.

The lush underwater world of the fish is contrasted with the built-up town above, which is full of flashing lights and jumbled architecture stacked up together. This aesthetic, Tavares says, came from the team looking at the bustling commercial landscapes of places like Khaosan Road in Bangkok, Times Square, Piccadilly Circus, and Shibuya Crossing in Tokyo. Along with taking inspiration from film and TV, like the meticulous scenery of anime Tekkonkinkreet and the realistic, award-winning CGI in Boardwalk Empire. 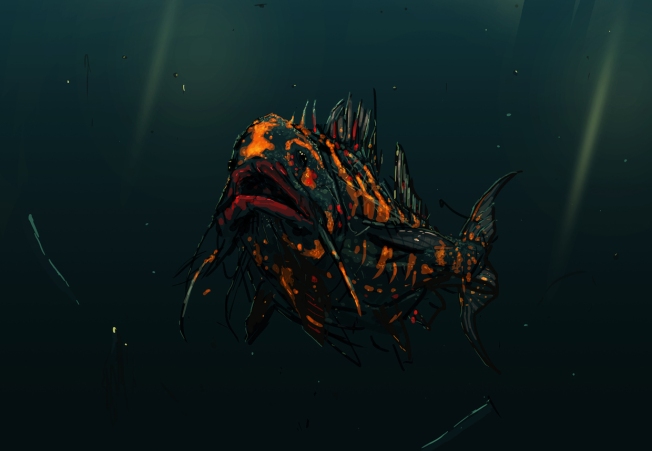 The short film premiered at Sundance 2013 and will be released later in the year.

2 thoughts on “Jonah: A Story of Legend, Friendship and Survival by Kibwe Tavares”