FilmAid  proudly invites you to experience stories of courage, strife and human determination, as told by refugee filmmakers at the 7th edition of the FilmAid Film Festival – from 21-23rd August 2013 at Alliance Française in Nairobi.

The festival will showcase award-winning films and documentaries from refugee filmmakers studying through FilmAid’s Filmmaker Training Program. The program allows refugee filmmakers to tell their own stories of courage, hope, despair and resilience in their own voices. The selected films provide a rare opportunity for the filmmakers to share the stories of refugees who have been forced to flee their homes to escape persecution, wars, or conflict. Alongside these films, there will be a selection of international feature films complementing the work of the refugee filmmakers.

This year, the festival will present 20 short and feature films from students and foreign filmmakers. Alongside the screenings at the Alliance Française in Nairobi, the festival will also feature an award ceremony schedule to recognize the best student films, and multiple discussion panels with representatives from UNHCR, human rights groups, civil society, the film industry, government, academia and the media.

Among the films premiering at the festival, Finding Hillywood – a documentary based on the 1994 Rwanda genocide and directed by Leah Warshawski – explores how the power of film can change and heal not just individuals but entire communities. Others premiering films include, Painful Tears, Ayong, The Edge, The Good and The Bad, Shattered and Restored among others.

Find out more about the programme of the festival after the jump. 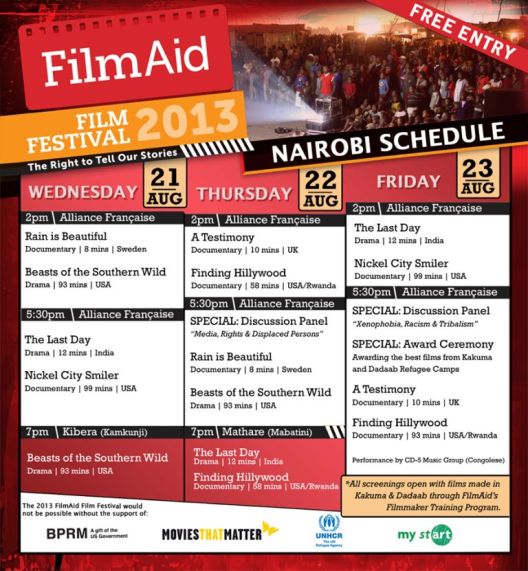 About the FilmAid Film Festival

Since 2001, FilmAid has continued to train young refugee filmmakers through its Filmmaker Training Programs in Kakuma and Dadaab refugee camps.  The 3 day event brings together film industry insiders, cinematic enthusiasts, filmmakers, critics, media professionals, academia, students, human rights activists, government officials and the general public to celebrate and recognize the talent and creativity of young refugee filmmakers in Kenya and beyond.

This year`s festival comes only a few months after FilmAid celebrated the momentous launch of DADAAB STORIES  – a multimedia documentary, bringing together video, poetry, music, community journalism and personal blogs on a cutting edge, interactive website. DADAAB STORIES is a living, curated collection of personal stories from one of the most challenging environments on the planet, offering powerful insight into camp life, which is collectively home to well over half a million individuals.