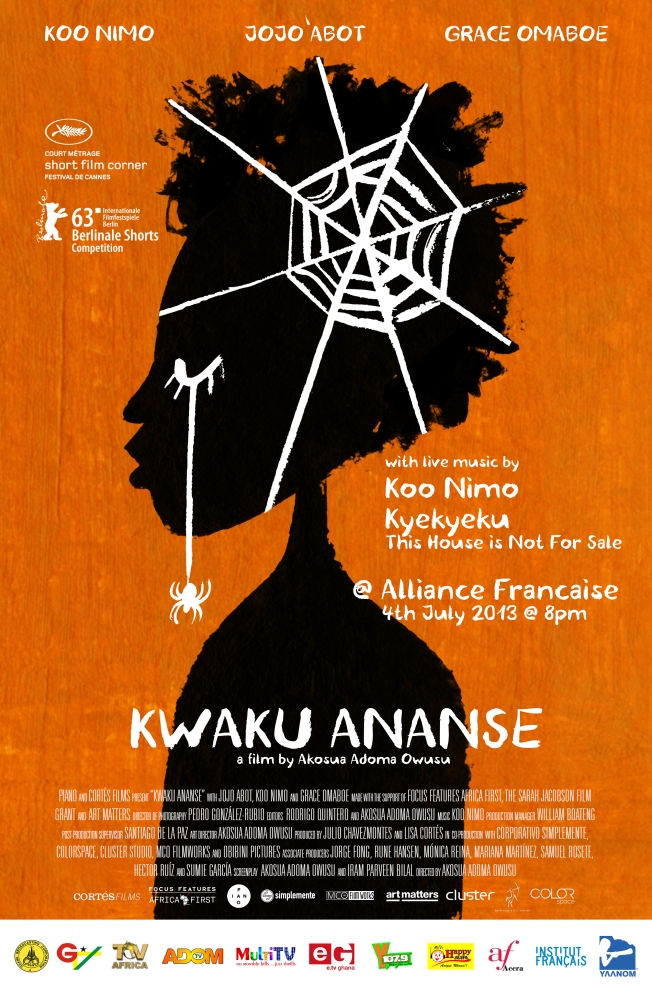 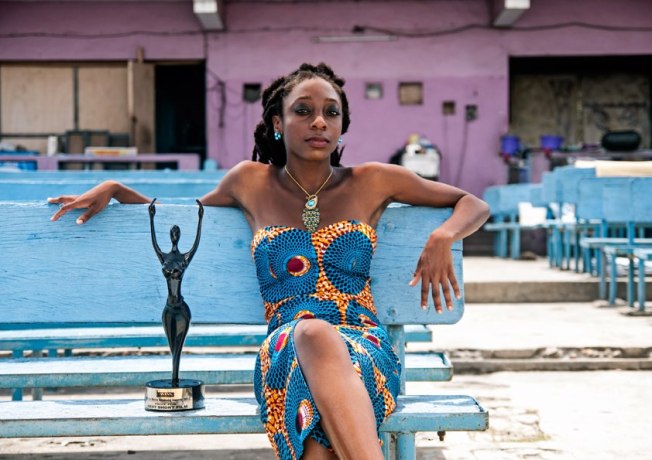 ‘Kwaku Ananse’ has been making rounds on the international film scene and now the creative retelling of a fable about a part man part spider is finally making its way home to premiere in Ghana.

On Thursday, 4th July 2013, at 8pm, join AMAA award-winning film director, Akosua Adoma Owusu of Obibini Pictures, at one of Accra’s most notable venues, Alliance Française, for the screening of ‘Kwaku Ananse’.  Attendees of the premiere will have an opportunity to meet and greet the stars of the film, Koo Nimo and Grace Omaboe.  Guests will also enjoy an evening filled with Anansesem (spider tales) featuring a live music concert by the living legend Koo Nimo, Kyekyeku, and This House Is Not For Sale.

In her latest film, Kwaku Ananse, starring legendary Palm wine musician Koo Nimo, pioneering actress Grace Omaboe, and singer Jojo Abot; Owusu tells a unique and deeply personal story weaving it with a semi-autobiographical thread while preserving Ghanaian mythology.  ‘Kwaku Ananse’ was Ghana’s sole winning film at the 2013 Africa Movie Academy Awards where it was awarded the prize for Best Short Film.  In addition, to earning recognition at prestigious institutions around the world including Berlinale Film Festival, Cannes Short Film Corner, and most recently at the French Film Academy’s Golden Nights Panorama program for the World’s Best Short Films of the year.

END_OF_DOCUMENT_TOKEN_TO_BE_REPLACED

Akosua Adoma Owusu, Ghanaian director and writer of the acclaimed short film Kwaku Ananse (which Ciné Kenya featured here), is thrilled to have her first narrative short nominated by the Africa Movie Academy Awards. “At its inception, I struggled to find a Ghanaian audience that would value our traditional story in contemporary cinema,” says Owusu, “it’s truly humbling Kwaku Ananse received the AMAA nomination. “

Kwaku Ananse was commissioned by Focus Features, as part of their prestigious Africa First Award Program, and supported by the Sarah Jacobson Grant, Art Matters grant, and a well-received IndieGogo Campaign.  The short film is a re-telling of the classic West African fable with a semi-autobiographical twist, featuring her uncle, Ghana’s legendary palm wine musician, Koo Nimo as Kwaku Ananse. Owusu received this award after gaining international attention with her short films, Drexciya and Me Broni Ba, as well as from her work within the art world at the famed Studio Museum in Harlem. Me Broni Ba, specifically, screened at over 80 international film festivals and was later acquired for distribution by The Cinema Guild.

Between travelling internationally to screen her acclaimed works, and hustling to acquire the funding needed to propel everything forward, Owusu is working hard to both further her own dreams and inspire other African filmmakers that they, too, can do the same. Recently awarded the Most Promising Filmmaker prize at Ann Arbor Film Festival and named in the Huffington Post of “Top 30 Black Contemporary Artists Under 40”, she’s certainly paving the way to do both and is thrilled that Kwaku Ananse, is preserving a piece of Ghanaian mythology and is being so well-received by international audiences.