END_OF_DOCUMENT_TOKEN_TO_BE_REPLACED

All you need to do is:
-click here
-Log in using your google+ or Facebook ID (the more the merrier!)
-Yellow Fever is in the Documentary category and you can vote there.

This is the first time Yellow Fever is available to watch online in full for free, ALL 7 minutes of rotoscoping, hand-drawn animation, pixilation, dancing, sweat and blood!!
END_OF_DOCUMENT_TOKEN_TO_BE_REPLACED 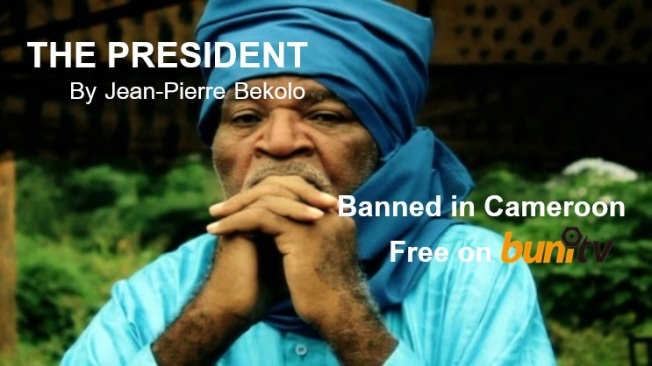 View this seminal film by Jean-Pierre Bekolo that was banned in Cameroon and South Africa for free until October 19th over at Buni Tv.

When the Cameroonian president disappears just a few days before the elections after 42 years in power, the country’s media go into overdrive, speculating on what happened. Meanwhile, the president’s kidnappers, who remain unnamed, are taking him on a tour of the country, forcing him to interact with the people that he has so wistfully ignored all this years.

The president is forced to answer for what he has done – which is not much. A controversial “mockumentary” that mixes fiction and reality, THE PRESIDENT questions the phenomenon of Africa’s “president-for-life” and the threat that the incertitude over their succession poses to their countries’ stability.

Films always come when everything is over. Why? Why can’t cinema be there even before the problems, to reflect what is happening, so we can fix it? I really think right now we have forgotten the very nature of cinema in the first place. Cinema is not neutral.

Of Good Report was banned for allegedly showing ‘child pornography.’ Jahmil describes the psychological thriller as “your classical tale of lust, shameful lust…,” saying that it’s about a teacher who becomes obsessed with his student “to a point where he cannot see that he’s obsessed with a child.” While agreeing that child pornography should be banned, Jahmil says Of Good Report is rather “making an indictment… For teenagers this a horror film. I want kids, particularly girls, to watch this and I want to scare them.”

Qubeka managed to get the banning over-turned and is also proceeding with a defamation case against the Film and Publication Board of South Africa.

Reflecting on the effects of the ban, he says,

I’m not sad for me. This has turned me into a superstar. My life has changed in a week. I’ve been in Variety magazine…three times. What I am sad for is my nation because my nation was refused the right to see the film. Self reflection is the only way you can develop. We are the mirrors of our society… If we are living in an age where our government is putting down draconian policies that don’t allow self-reflection, instead we showcase a world that is actually not real, so how will we get to a place of seeing where we are?

Calling his role as a filmmaker “a privilege” he also describes film as “the definitive artform of the 21st century.” Watch this short interview where Qubeka elaborates further on his criticism of the Film Board’s decision:

Le President was sidelined in Cameroon earlier this year because Jean-Pierre’s film discussed the end of 80-year-old President Paul Biya’s reign – a topic that is taboo in the country,

He was minister in 1962; Barack Obama was one year old. He’s been there forever…You don’t have to be a genius to think that an 80-year-old man can go one day.

Pointing out that “everyone will give me money to make a film once the president is gone to say how bad he was,” he says he would rather made the film now “to anticipate and start a conversation about what will happen when he leaves or if he leaves…When you see the Congo, the Cote D’Ivoire, these are presidents who stay in power (very long) and then you have 20 years of war afterwards.”

END_OF_DOCUMENT_TOKEN_TO_BE_REPLACED

Friends over at Shadow and Act announced an intriguing event is taking this week, Wednesday, July 31, at Spectacle Theater, 124 S. 3rd Street, Brooklyn, New York 11211. THE FUTURE WEIRD is a new monthly series screening films which are set in imagined futures, made by African & global south directors. Presented by Derica Shields and Megan Eardley, the title is inspired by The State’s ongoing documentation of non-western futurisms.

Included in the screening series is Cameroonian director Jean-Pierre Bekolo’s satirical sci-fi vampire film Les Saignantes (The Bleeders) alongside shorts by Wangechi Mutu and Kibwe Tavares plus weird and wonderful clips from forgotten corners of the colonial archive.