This week, my feature profile is Mũchiri Njenga. He is the founder of Nairobi-based boutique creative studio Studio Ang which has become a haven for independent artists that enjoy working on unique and visually innovative projects. Njenga is a self-taught transmedia artist and filmmaker whose background spans the fields of animation, motion design, music and film. Kichwateli and My World is Round are two short films by Njenga that screened at the Afrika Eye Film Festival at The Watershed in Bristol, UK last year.

Kichwateli is a short poetic film set in a post-apocalyptic African slum and city. The film takes the viewer on a spiritual and metaphorical voyage through a young boy’s dream, mixing imagery of the boy wandering inquisitively with a live TV as his head to show the effects of media on a young generation.

The short film features music by Just A Band, Modeselektor ( a breakbeat duo from Berlin) and Maasai Mbili (Nairobi-based Art group). The music is a metaphor for the way we are now all plugged into the same images of global anxiety while at the same time we ourselves, are subjects of scrutiny by the all-seeing ubiquitous cameras. The director of Goethe-Institut Nairobi Johannes Hossfeld said this of the project,

Muchiri made one of the best music videos I have ever seen in my life.

Kichwateli was Studio Ang’s contribution to the BLNRB project, a cooperation between Kenyan and German musicians initiated by Goethe-Institut Nairobi and Gebrüder Teichmann. Learn more about the filmmaking process for Kichwateli and the inspirations that led to it’s production by clicking here. 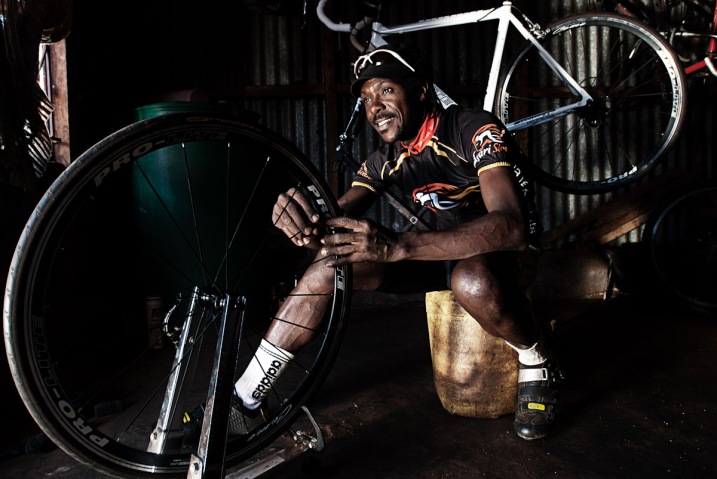 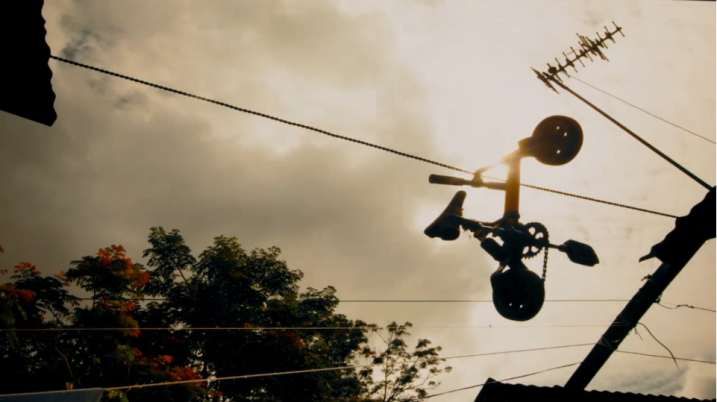 Our World Is Round

Our World Is Round  is a short film that celebrates the life-time achievement of veteran Kenyan cyclist David Kinjah and his award winning team Safari Simbaz. The film details how Kinjah discovered cycling and what brings him joy in this activity. Having raced and won medals in prestigious races around the world, Kinjah also mentored Tour De France 2013 winner Chris Froome. 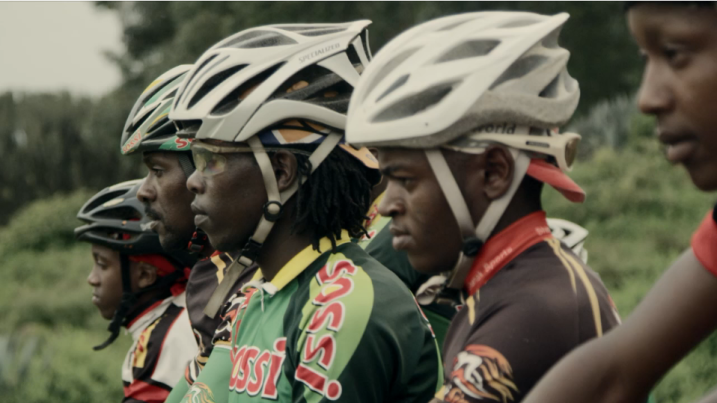 Kinjah, the first black African rider to sign for a European cycling team, trained Froome as a cyclist when he was a boy while his family was living in Kenya. The film also delineates Kinjah’s strong desire to transform the lives of the people in his village through his passion and the power of cycling. This is an initiative which has taken form in the Safari Simbaz Trust,

Most of these young boys are school dropouts who would have ended up being gangsters. But through Safari Simbaz, they’ve learned a lot about life, gone back to school and most of them [now] have a career in pro-cycling, representing Kenya in international races globally.

In this film, the advantages that new technology has provided are also brought to the fore. When Kinjah first started cycling professionally, he mainly relied on magazines and newspapers. Now, with the help of web developer Fady Rostom, Kinjah and his team have an online presence that can be reached globally. Read more about the film and view more photos at a previous feature I wrote here.

END_OF_DOCUMENT_TOKEN_TO_BE_REPLACED

Ng’endo Mukii is an award-winning Kenyan filmmaker whose work ranges from animations to documentaries. Born and raised in Kenya, she also undertook further education in UK and USA. Yellow Fever which was featured on Ciné Kenya previously here, is a short film that has become her most well known work and has seen her attend a range of festivals over the past year. It explores the theme of skin bleaching in Africa.

Yellow Fever, her thesis project work from the Royal College of Art (RCA) in the UK, is an animation that is based on real interviews and memories. In particular, the responses from her niece regarding the subject  of skin colour and the privilege afforded to those with light or white complexions are very touching and insightful. It was while previously studying illustration at the Rhode Island School of Design in the US that Ng’endo first tried out some video and animation projects.

Ng’endo spoke to Business Daily Africa about the impetus behind the Yellow Fever project,

I interviewed my family asking questions about our physical appearance as African women. Even though I was only focusing on them, it’s supposed to have wider view of what is going on in Kenya. Using animation instead of a camera also made it a lot easier to talk to my niece because she was about six at the time and the things she ended up saying were really sensitive.

END_OF_DOCUMENT_TOKEN_TO_BE_REPLACED

Kenyan actress Lupita Nyong’o was born in Mexico, raised in Kenya and educated in the USA. She is a graduate of the Yale School of Drama’s Acting program and her stage credits include playing Perdita in The Winter’s Tale (Yale Repertory Theater), Sonya in Uncle Vanya, Katherine in The Taming of the Shrew, as well as being in the original production of Michael Mitnick‘s Elijah.

In 2009, Nyong’o released her moving documentary In My Genes.  It is a documentary that tells the plight of people living with Albinism in Kenya. The film follows 8 people and reveals their struggle in coping with a condition that is rarely understood by most people in Kenya; but equally celebrates their resilience through stigmatisation that is no fault of their own.  The film preceded the murders of albino people in Tanzania that put this issue on the global map thus placing this concern squarely in view of a global audience. It is filmed and produced by Lupita. View the trailer below:

The synposis is as follows:

Agnes may not seem like someone with much to laugh about. For one thing, she has albinism– a lack of pigment in the skin, hair and eyes– and her appearance has provoked prejudice from family, friends and strangers since she was born. But despite all odds, Agnes refuses to lead a life of sorrow.

This fascinating and inspiring documentary also shares the stories of seven other people’s individual experiences of living their lives with albinism in Kenya, a predominantly black society. While each person’s story is unique, they all have one thing in common: they know what it is like to stand out uncomfortably in a crowd!

Agnes and Lupita
Courtesy of LadyeNews

During the same year, Lupita was also the lead in MTV’s award-winning TV drama series, Shuga (2009) commisioned by MTV Networks Africa in association with MTV Staying Alive Foundation, PEPFAR (US President’s Emergency Fund for Aids Relief) and the Government of Kenya. It aired on MTV Base and is an initiative dubbed MTV Staying Alive Ignite! It is a controversial hard-hitting drama that followed the lives, loves and ambitions of a group of young people whose bright lives and  futures are perilously out of balance due to their love of living dangerously.